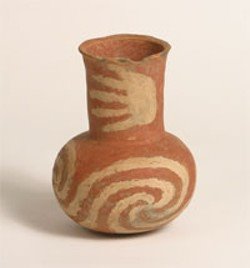 Distinguished anthropologist Sam Dellinger once mused, “Imagine my chagrin when I visited such museums as the Peabody at Harvard, the National Museum at Washington, D.C., the one at the University of Michigan, the Heye Museum of the American Indian at New York, and found there that their finest and most valuable Indian displays had been sent from Arkansas. Specimens are there that can never be found again in our state.”

Fortunately, many artifacts from the state’s ancient past are still in safe keeping within collections maintained by the University of Arkansas Museum, now closed to the public, where Dellinger helped build an extensive and important archeological collection. Arkansans now have a rare opportunity to see a vast compilation of these prehistoric artifacts at Little Rock’s Old State House Museum.

The exhibition Sam Dellinger: Raiders of the Lost Arkansas sheds light on one man’s diligent efforts to save Arkansas’ past from pot hunters and looters, and mold state and national history. Dellinger’s story, and ultimately the story of some of Arkansas’ earliest inhabitants, is told through informative text panels, an exciting video presentation and an educational touchscreen kiosk.

The highlight of the exhibition, however, is the impressive collection of primitive artifacts.

Visitors travel back in time to nearly a century ago. Clay-colored walls serve as a backdrop to cases filled with rows and rows of captivating Indian pottery and objects dating from 1100 A.D. to 1550 A.D. The tall, neoclassical style cases housing the artifacts recall museum presentation typical of the late 19th and early 20th centuries and replicate Dellinger’s own collection storage areas. One cannot help but notice the sheer volume of artifacts included in Sam Dellinger: Raiders of the Lost Arkansas. Nearly 200 objects are on display from three different cultures: Mississippian, Spiro Mounds and Bluff Shelters.

The exhibition not only showcases the University’s notable collection but also significant artifacts from Arkansas’ pre-history collected by renowned institutions like Harvard’s Peabody Museum, the Field Museum and the Smithsonian Institution’s National Museum of the American Indian NMAI). Items from the Peabody include carved shell earplugs, worn for decoration much like today’s earrings. A woven bag still filled with its original contents, ancient acorns, as well as a selection of arrowheads is on loan to the Old State House from the NMAI.

Thousands of years ago, lumps of clay were carefully shaped by the hands of native peoples to create useful and beautiful objects. Visitors are invited to travel through time and cultures, noticing the similarities and differences in form, pattern and function. Water bottles, pipes, seed jars and bowls are testaments to the visual considerations of their creators. Many of the bottles feature sculptural shapes with bulbous bases. The bowls are graceful ellipses. Many showcase an inspired array of patterns, created either through intricate incised lines or bold use of organic pigments.

Striking head pots reveal much about what some of Arkansas’ earliest inhabitants may have looked like and their style of adornment. In the center of the gallery is an effigy pipe made from flint clay. This striking artifact, referred to as “Big Boy” or “Resting Warrior,” was discovered at Craig Mound. The seated male figure wears a detailed headdress, feathered cape and beaded necklace. No detail will go unnoticed by visitors as the pipe can be viewed in the round.

Several relics made to resemble both human and animal likenesses are also presented. Keen representations of fish, rabbits, bats, cats and fowl embellish bottles and bowls. Some vessels are formed into an entire animal, while others feature applied designs.

The original purpose of an artifact is not always evident. JoEllen Maack, curator of the Old State House Museum says, “We don’t always know why something was made or what something was used for. That is part of the mystery and perhaps one of the greatest reasons why we are fortunate to continue our examination of our state’s ancient people through Dellinger’s efforts.”

The Old State House Museum’s exhibition, Sam Dellinger: Raiders of the Lost Arkansas, gives visitors a rare opportunity to view ancient Arkansas artifacts, including some removed from the state more than 70 years ago.

The exhibit runs through January.